What kinds of jobs do coding bootcamp graduates find?

It seems that companies today need more people who know coding faster than a college or university can put out into the professional market.  The real world has been seeking experts in areas where the business climate is constantly changing and the formal traditional education is lagging.

1 million of the best jobs in America may go unfilled because only 1 in 4 schools is teaching computer science.  So, the opportunity is there for the taking.

Here’s some data that may help us understand in a better way how a code bootcamp graduate finds jobs:

Some graduates found jobs in: 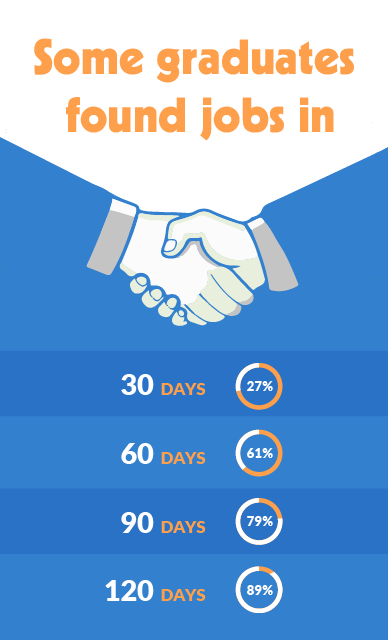 Graduates from bootcamps are saying that learning to code gave them the opportunity to change their career.  TheMuse.com highlights the story of _Dang: _she found her dream job just after the program at De Bootcamp.  She started the program with zero programming knowledge, and now she is employed as a software engineer and can contribute meaningfully to development teams and discussions.

Alyssa Ravasio _started her own company called _Hipcam; _she went into Dev Bootcamp _with a very specific goal: to learn enough coding skills to get the startup in her head off the ground, and now her company raised $2 million in seed funding last fall.

Employers will look at portfolios and projects to verify coding skills. Some jobs that a graduate can find could be:

You have to keep learning new technologies, and continue practicing and improving your coding skills.  Get a mentor, apply for internships.  Keep pushing forward.  You can even volunteer in non-profit projects to build a portfolio.

The marketplace could change in the upcoming years, so the data we can get today may do a 180 turn tomorrow.  However, job growth is expected to grow up to 24% by 2020.  Don't expect to get an ideal job just after getting out of school, but you can start with little projects or build your own protfolio.